She argued that categorizing premenstrual syndrome or feelings of guilt as disorders resulted from sexism in a field dominated by men.
New York Times
By Clay Risen
Aug. 2, 2021

Paula Caplan, a pioneering psychologist who exposed how her profession had pathologized a wide range of female traits and social responsibilities, including motherhood, menstruation and even shopping, died on July 21 at her home in Rockville, Md. She was 74.

Her daughter, Emily Stephenson, said the cause was metastatic melanoma.

Starting in the late 1970s, Dr. Caplan merged a rigorous clinical analysis with a fierce feminist perspective to show how many of the problems that psychologists said were innate to women — and especially mothers — had in fact resulted from social structures and discrimination that forced them into difficult situations, then medicalized their inevitably negative responses.

For example, in a 1984 article, “The Myth of Women’s Masochism” (and in a subsequent book by the same title), she took aim at Sigmund Freud and his acolytes, who said women suffered from “moral masochism” — that is, that they took pleasure in the frustrations and guilt that often arose from their roles as mothers and spouses.

Dr. Caplan demolished Freud’s claim, first by pointing out that most women get no joy out of such pain, and then by showing how such frustration and guilt were often the results of unfair expectations placed on them by a patriarchal society.

“She was a great defender of women’s honor,” said Phyllis Chesler, who is also a feminist psychologist and the author of “Women and Madness” (1972). “The image of women as vicious and cruel, she sought to repair that.”

Dr. Caplan, the author of 11 books, was perhaps best known for her seven-year battle with the American Psychiatric Association as it planned the fourth edition of the Diagnostic and Statistical Manual of Mental Disorders, the encyclopedic guide used by millions of doctors to make diagnoses and by insurers to pay for them.

Did you know you can share 10 gift articles a month, even with nonsubscribers? Share this article. She took particular issue with the decision by the manual’s editors to include “premenstrual dysphoric disorder,” in effect a lengthy or intense instance of premenstrual syndrome. Dr. Caplan argued that because P.M.S. was the natural result of a woman’s fluctuating hormone levels, it stood to reason that some women would experience it more strongly than others, in the same way that varying levels of testosterone made some men more aggressive than others.

“If they had made a decision suddenly pathologizing a half million men, there would be a public outcry,” she told The New York Times in 1994. “I was so deeply disturbed by the lack of concern with scientific support for what they were including or rejecting, and the low level of apparent concern for the effects on patients who might get these diagnoses.”

Half in jest, she proposed that the manual include “delusional dominating personality disorder” for men with high testosterone levels. The editors rejected her proposal, which, she said, just proved her point — and showed that they had no sense of humor.

Still, she continued to attack the way her profession treated women, especially as the proliferation of antidepressants in the 1990s made diagnosis lucrative for medical professionals and insurers.

“In our increasingly psychiatrized world,” she wrote in The Washington Post in 2012, “the first course is often to classify anything but routine happiness as a mental disorder, assume it is based on a broken brain or a chemical imbalance, and prescribe drugs or hospitalization.”

Her experience opened the door to a broader critique of her profession — namely, what she saw as an urge to pathologize everyday human emotions. In fact, she argued, doing so could do more harm than good by encouraging healthy people to think they were sick.

“She had a major impact that keeps growing on the psychology of women,” Lenore E. Walker, a psychologist and the author of “The Battered Woman” (1979), said in a phone interview. “The body of work she left behind is classic.”

Paula Joan Caplan was born on July 7, 1947, in Springfield, Mo., to Jerome and Theda Ann (Karchmer) Caplan. Her mother was a clinical psychologist, her father a businessman.

Dr. Caplan attended Radcliffe College, now part of Harvard, where she intended to become a journalist. But she was rejected from the nearly all-male staff of The Harvard Crimson, the student newspaper, an experience she chalked up to sexism. At the same time, in her English classes she found herself more interested in the psychological rather than strictly literary analysis of fictional characters, and she decided to change pursuits.

She received her master’s and doctoral degrees in psychology from Duke and moved to Toronto in 1974 after her husband, Marcel Kinsbourne, found a job there.

The couple divorced in 1978. A previous marriage also ended in divorce. Along with her daughter, Dr. Caplan is survived by her son, Jeremy; her brother, Bruce; and five grandchildren.

After moving to Canada, Dr. Caplan was a psychologist for the Toronto Family Court for three years. Among her first efforts was a study of assertiveness among girls and boys, following on the work of the prominent German American psychologist Erik Erikson, in which he had concluded that boys were innately more assertive than girls.

Dr. Caplan showed otherwise. Focusing on very young children and diminishing the presence of adults in the room during the study, she demonstrated that it was gendered socialization, not biology, that made girls act less assertively than boys.

Dr. Caplan’s work extended beyond academic psychology. An actor since high school, she had small parts in TV shows and commercials, only some of which had anything to do with her intellectual pursuits.

She wrote plays and directed documentary films, including “Isaac Pope: The Spirit of an American Century” (2019), about a Black man who had served in the Army under her father in the Battle of the Bulge during World War II.

The film was of a piece with her latest interest, veterans and specifically those deemed to be suffering from post-traumatic stress disorder, a diagnosis she largely rejected. There was nothing pathological about having a strong, even debilitating reaction to the horrors of war, she said, and our desire to medicalize those reactions made it possible for nonveterans to ignore just how terrible war could be.

“Leaving this work to psychotherapists alone may be not only harmful to the soldiers but also dangerous for us as a nation,” she wrote in The Washington Post in 2004. “It helps hide the consequences of combat, making it easier for us to go to war again the next time.” 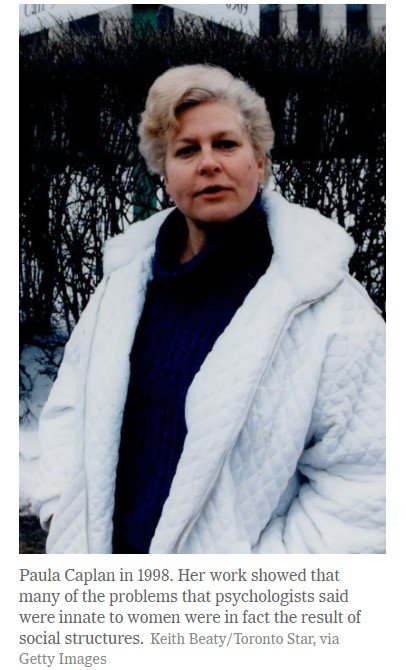 Paula Caplan - List of NARPA presentations through the years, with links

Video: "There Are No Rules About Psychiatric Diagnosis — And That Must End!” -- Keynote presentation at NARPA annual conference, September 4, 2014