Advocate For People With Mental Illnesses Dies
Joseph Shapiro, January 19, 2010 (National Public Radio)
Judi Chamberlin, who died this weekend at age 65, was a civil rights hero from a civil rights movement you may have never heard of. She took her inspiration from the heroes of other civil rights movements to start something she liked to call Mad Pride --- a movement for the rights and dignity of people with mental illness.

It started in 1966, when Chamberlin was 21 years old and seeing her doctor because she was dealing with a deep depression. "After a while, he suggested I sign myself into a hospital because I was just not functioning, I was so depressed

. And I just thought, 'Oh a hospital's a place where you get help.' And you know, I'd been in hospitals for surgery and things like that, and didn't think of it as having anything to do with your fundamental rights. So I just said, 'OK, I'll try it.' "

Chamberlin told her story in a 2006 interview with Will Hall, host of Madness Radio, a program by people like Chamberlin who call themselves "psychiatric survivors."

"And very quickly, [I] found out that once you sign papers to go in on a voluntary basis, but then you can't leave when you want to leave, which was absolutely shocking to me," she said.

She got out of that state hospital and moved to Vancouver, British Columbia, where she lived with other people who'd been diagnosed with mental illness but who'd then gotten government money to develop their own treatments. She recovered and eventually moved to Boston, where she started working with other former American patients who wanted to change the system. They called themselves the Mental Patients Liberation Front.

"When I arrived at this storefront in Cambridge, Mass., I was a senior Harvard student, had been locked up five times, so I was referred by Harvard to volunteer there," recalls David Oaks, who came to the group in 1976. "And I walked in, and it was a little radical ragtag group, Mental Patients Liberation Front. And Judi was right in the thick of folks, just really warm, community organizer."

Oaks now runs his own advocacy group, MindFreedom International. Chamberlin was a mentor. "One thing she immediately helped teach a lot of people was basic 101 about mental health liberation: That we're equal; that we have rights."

Chamberlin put that basic thinking into a book called On Our Own, which published in 1978. In it, she argued that, as she'd experienced in Canada, just the ability to have some say in your own treatment was a key part of making that treatment work.

Chamberlin's book became a manifesto for other patients. But it influenced lots of people in the mental health establishment, too. Today, notes Oaks, it's common for people with mental illness to have a say. "Most U.S. states now have an office of mental health consumer affairs or something to hear the voice of mental health clients," says Oaks. "And it certainly is people like Judi that did that."

Robert Whitaker, the author of Mad in America, a history of the treatment of people with mental illness in America, says Chamberlin was "a seminal figure in the rise of the consumer movement." She was able to get across the patient's point of view in a way that was strong, but also clear. And that appealed to people in the mental health field who were often the target of her criticism.

"Judi was fierce, incredibly fierce," says Whitaker. "And by that I mean she knew her mind, she spoke her mind, and she didn't worry if she offended people who were listening."

Chamberlin, he says, was irreverent, "brilliant" and "a joy to be around." He also says she was "incredibly brave," because "it obviously takes a lot of bravery to confront a society that's had a different belief before."

Chamberlin told people with mental illness that they were, like everyone else, people with quirks and differences, but with strengths and abilities, too. She wanted people to reclaim the description "mad" as something that was OK.

"She changed it from a word that was a pejorative word," says Whitaker. "That was saying to the world at large: We are worthy individuals, and our minds our worthy, and they're to be respected."

Chamberlin even used "mad pride" as her e-mail address. "And you can see the historical echoes with 'black pride' as well," says Whitaker. "It absolutely followed in the footsteps of the civil rights movement."

Chamberlin traveled the world as an advocate, even in the months before her death. She worked at Boston University on mental health issues and started a center with federal funding to support other psychiatric survivors.

More recently, Chamberlin faced another illness: lung disease. And last year, when her insurance company told her she'd exhausted her hospice benefit, she faced going into a nursing home. She started a blog she called Life as a Hospice Patient about her fight to die at home.

Late Saturday night, she died as she wished: at home, in her favorite chair, surrounded by friends and family.

A psychiatric survivor and long-time activist in the survivor/consumer/ex-patient movement, Judi co-founded the Ruby Rogers Advocacy and Drop-In Center, a self-help center run by and for people who have received psychiatric services. She was associated with the [National Empowerment Center] (http://www.power2u.org/) and MindFreedom International for many years, and she was a devoted NARPA member since the organization's earliest days.

Judi is the author of the landmark On Our Own: Patient Controlled Alternatives to the Mental Health System, which was originally published in 1978 and has recently been republished in Britain and Italy. She also has written many articles about the movement, self-help and patients' rights.

Judi was affiliated with the Boston University Center for Psychiatric Rehabilitation where she served as Senior Consultant on Survivor Perspectives and directed a research project on user-run self-help services. She was also on the staff at the National Empowerment Center.

Judi was a board member of NARPA for three decades, serving as its President and then Secretary. She was also a board member of the National Disability Rights Network (NDRN). Other boards and committees on which she served include: the Massachusetts Mental Health State Planning Council; the Disability Law Center Governing Board; the Coalition for the Legal Rights of People with Disabilities; and the Consumer/Survivor Mental Health Research and Policy Work Group.

Judi has spoken at conferences and meetings throughout the U.S. and has appeared on many radio and television programs, discussing the topics of self-help and patients' rights. Her international work took her to Canada, England, Scotland, Ireland, Iceland, Sweden, Holland, Portugal, Italy, Australia, New Zealand and Japan.

In 1992, Judi was awarded the Distinguished Service Award of the President of the United States by the President's Committee on Employment of People with Disabilities. She also received the David J. Vail National Advocacy Award and the 1995 Pike Prize, which honors those who have given outstanding service to people with disabilities.

That is the motto of a grass-roots movement that has carried various names over the last generation, but has always revolved around a single principle: self-determination for people diagnosed with mental illness. Call them psychiatric patients or consumers or survivors, they are fighting together to gain more control over their treatment, and more say in the mental health system overall. And they have won some striking successes in recent years, gaining more input into official policy and creating new jobs for people who, 12-step-style, have recovered from the worst of their illness and now want to help others in crisis.

The mother of that movement, many people would say, is Judi Chamberlin of Arlington.

Chamberlin was hospitalized against her will for depression in 1966, and shocked by how she was treated. Her seminal book, “On Our Own: Patient-Controlled Alternatives to the Mental Health System,” came out in 1978, and became a manifesto for the movement. Chamberlin's activism for patients' rights spanned the next 31 years, and evolved with the history of mental health treatment in this country.

At first, in a system that relied heavily on state hospitals, she focused largely on protecting inpatients' basic rights. As “deinstitutionalization” took hold and the hospitals emptied, she focused more on outpatients' needs for services and dignity as well. She also joined forces with activists for people with physical disabilities, and extended her reach internationally, helping push a treaty on disability rights that the United Nations passed in 2006. Read the full article.

From the Disability Social History Project:

"In her early 20s Judi Chamberlin was hospitalized in a state institution due to depression. She was horrified by the prison-like atmosphere of the hospital and soon discovered that, as a psychiatric patient, she had no legal rights. Later, in the 1970s, Judi cofounded a group of psychiatric survivors called the Mental Patients Liberation Front. In 1978 she published a book, On Our Own: Patient-Controlled Alternatives to the Mental Health System. Judi received the Distinguished Service Award of the President of the United States from the President's Committee on Employment of People with Disabilities in 1992."

Interview with Judi Chamberlin; From Off Our Backs, Jul/Aug 2003

A talk with Judi Chamberlin: Facing death, a plea for the dignity of psychiatric patients, Carey Goldberg, Boston Globe, March 22, 2009.

Chamberlin, J. Presentation on empowerment and recovery, and how professionals and consumers can work together to promote these goals. Ontario International Association of Psychosocial Rehabilitation Services conference, Niagara Falls, Ont., Canada. (October 20, 1999). 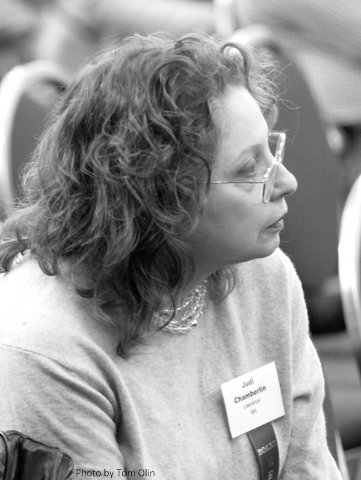 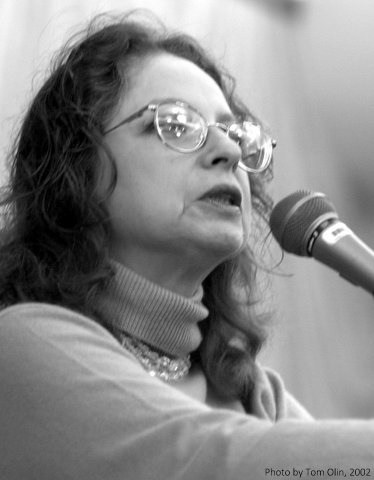